Eliza Hotchkiss’ first marriage was to Richard John Bishop in 1913. Their first son Jack was born in Froncysyllte in Wales, where there is the most magnificent aqueduct stretching across the valley.

Richard’s mother was Mary Jane Cheshire and her father was born in Upton Magna, a tiny village through which Richard made his way to the brick works daily, according to Jack. While he lay dying of TB, Richard instructed his cousin Samuel Cheshire to look after his family after he was gone. Mary Jane’s husband was Richard Bishop, born in 1858 and known as “a bit of a lad”. They had seven children and Mary died in 1915. Sarah Ellen Powell had married Benjamin Wassall in 1902 and they had a son. Benjamin died in 1917 and Sarah married Richard in 1918. Prior to her marriage into the Bishop family, there had been little love lost between Sarah and Richard’s niece, also Sarah who had married soldier Samuel Ellis. In fact both Sarahs and Samuel appeared in court in 1907-1908:

Sarah Wassall, Bodkin-row, Ditherington, was charged with assaulting a neighbour, named Sarah Jane Ellis, on the 14th September. Complainant said defendant came into her house, and refused to go out. Defendant and a sister knocked her to the ground, and if her husband had not come to her assistance she did not know what would have happened. Defendant’s language was not fit for any woman to hear. Samuel Ellis, complainant’s husband, corroborated. Defendant, who denied the assault, was fined 15s., including costs, the Chairman remarking that complainant and defendant had better keep apart in future. (Shrewsbury Chronicle, 27 Sep 1907)

Samuel Edward Ellis, labourer, Bodkin Row charged with stealing an overcoat, property of Cash Clothing Co., Pride Hill. He said he was with a few friends, and had had a little ale. He seemed strange in his manner, and was giddy. He added that he had been abroad for 14 years. The defendant was remanded until Saturday, advised to keep from the drink in the meantime.
(Wellington Journal, 21 Nov 1908).

Bodkin Row, down by Factory Bridge: scenes of life and death near the Flax Mill. The Maltings, currently being restored, is: “thought to be the world’s first iron-framed building and is considered a forerunner to the modern skyscraper” (BBC).

Richard’s father was John Bishop, born in 1813 in Berriew, Montgomeryshire. He married Elizabeth Clay in 1839. Following her marriage at the time of the 1841 census, it appeared that Elizabeth was living with her mother Isabella Clay in Spring Gardens, Shrewsbury along with two of her children, Ann and Charlotte. Meanwhile, John Bishop was living with his widowed mother and siblings close by in Canal Buildings. It transpires that in 1840, according to settlement and removal papers for Berriew: “Examination of Elizabeth Evans, otherwise Bishop, wife of John Bishop. John – the son of Catharine Bishop, now living in St Mary, Shrewsbury – has absconded. Elizabeth’s maiden name was Clay and she had a child by him – Ann Clay – before their marriage, but none after. Statement from Catharine Bishop, widow of John Bishop, stating that her maiden name was Evans. Gave birth to John five weeks before her marriage, hence the change of name. Elizabeth to be removed from St Mary, Shrewsbury to Berriew”. By 1851, John was a railway labourer and the family were living together in Spring Gardens.

In 1872, there was a charge of wholesale shoplifting at Shrewsbury…

An elderly woman named Elizabeth Bishop, who resides in Castle-foregate, with her three married daughters, Charlotte Ward, Emma Shipton, and Mary Lancashire, were in custody, before J.T. Nightingale and T. Groves, Esqrs., on the charge of stealing 50 yards of print from the shop of Messrs. Maddox and Co., High-street. Mr Chandler appeared for the prosecution ; and, in opening his case, said it would be his duty that day to lay before the Bench what would perhaps prove to be one of the most extensive systems of shoplifting they had had in the borough for some years. The prisoner Bishop as the mother of the other prisoners, and they all lived in the same locality. For some time past [Inspector] Lloyd had seen the prisoners going together to different shops in the town, and afterwards to some of the pawnbrokers, but still was not able to bring any clear case against them ; and rather than bring forward a frivolous charge he abided his time, watched the prisoners still more closely, and had detected what he believed would be proved to be a very extensive system of fraud [pieces of cloth identifiable by certain marks disappearing from shops and appearing at pawn shops]… Detective Lloyd recalled said : I found the piece of grey alpaca at the house of the prisoner Ward. There is a jacket and little petticoat, made up of the same material. The material was upstairs on some bags. Mrs Ward… [given the opportunity to provide a satisfactory explanation for possession of it] gave no account of it whatever. Another piece of the same alpaca I found at Shipman’s, with two small jackets made up of the material. The articles were in a box up-stairs. Mrs Shipman made no observations when I found the things. At Lancashire’s I found another piece of the same material… [She] replied that she bought 15 yards of it from Maddox’s… I found another piece of grey alpaca at Mr Kent’s pawn-shop, where I ascertained it had been pawned in the name of Ward… another piece… was pledged in the name of Shipman. One piece of check alpaca was found by me at Bishop’s house, and another was found pawned at Mr. Kent’s, in the name of Shipman… The prisoners were committed for trial upon each of these charges with stealing 16 yards of lindsey, of the value of 15s., and two pairs of stays of the value of 3s., from the shop of Mr. W. Jones, draper, Mardol, and upon this charge, also, the three prisoners were committed for trial. A large quantity of other goods found in the possession of the prisoners had been identified by different tradesmen of the town, and a still larger amount remains that has not yet found owners. The prisoners were not released on bail.
(Shrewsbury Chronicle, Friday, June 14, 1872).

It seems that the move from Berriew was made by John’s parents John and Catherine. She was born in Welshpool in 1784 and married John of Walesbird in 1813 in Berriew. There were many tragedies amongst John and Catherine’s ten children – Evan Bishop was killed in India, Thomas was caught in machinery and literally torn to pieces, Samuel was drowned in the River Severn and two girls, both named Elizabeth, died young. John felt responsible for the loss of his favourite son Samuel and he died aged 56. When his wife Catherine died 10 years later, their daughter Mary Jane worked as a laundress to provide for her four brothers. Following their conversion by Mormon missionaries, Mary took James and William with her to America. Mary married sailor Edward Price whom she met on the journey. Mary Jane Price’s granddaughter Nettie Price Obray wrote Mary’s story which also contains letters sent between America and England (Leaves on a Tree website no longer available).

Thanks to Alan Bishop and Rhiannon Hordley for photos and information on the Bishop family.

Each Remembrance Day, I am reminded that as well as the ‘lions led by donkeys’ who were killed in action, there were many brave men who joined up with the intention of serving their country only to die of the diseases they contracted.

Bishop family: Richard John Bishop in back row right (?)
next to Eliza, aka Frances, née Hotchkiss

Richard John Bishop joined the Shropshire Light Infantry at the age of 20. He was 5’ 4½” tall, had a 33” chest, fresh complexion, grey eyes and brown hair and was pronounced fit for military service on 14 Apr 1903.

For the first year or so he served at home, probably training, polishing his kit and no doubt square-bashing. On 28 Nov 1904, he was transferred to India for six months, where he spent some time in Fyzabad and attained a 3rd class certificate of education in Kasauli Hill Station. He also passed classes of instruction in stretcher drill.

In addition to the British Army stationed in India, Great Britain maintained a large locally recruited force, the Indian Army, made up of three armies brought together as a single army in the reforms which began in 1903. The 7th Bengal Cavalry were based in Fyzabad and presumably the contingent from the Shropshire Light Infantry was brought in to help with the reformation.

According to his army records, Richard appears to have been a bit of a rogue – he was docked some pay on a couple of occasions. With his consent, he was transferred to the Army reserve in Mar 1911. On 4 Nov 1911, he was ‘In Civil Custody, convicted and sentenced by the Civil Power to 3 months hard labour for a misdemeanour’.

Richard was posted several times with the Medical Expeditionary Force in France in 1914-1915 between intervals back home. By Nov 1915, he had been appointed an unpaid lieutenant corporal and by Dec 1915 he was being paid in that post. However on 17 Apr 1916 he was deprived of the Lieutenant stripe; in May he had suffered 3 days of haemoptysis (coughing up blood) and on 10 Jul 1916 he was pronounced no longer physically fit for war service. 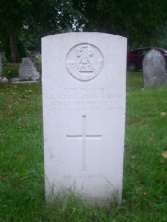 Richard died in 1917 and his indomitable wife Eliza fought to have his name remembered on the Chirk War Memorial. He may not have died on the battle field, but in her eyes, he was still a hero. Richard left the care of his family in the capable hands of his cousin Samuel Cheshire.