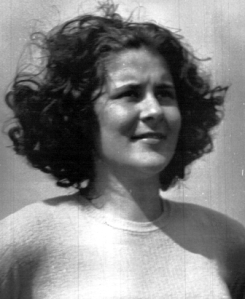 Pam was never sure whether she was a Kentish Maid or a Maid of Kent. It turns out she was a Kentish Maid. Apparently it all depends on which side of Kent you were born. Kentish Maids were from the west and Maids of Kent from the east. Due to the bombs around their home town of Erith, the Brett family had been evacuated to Ickham when Pam was ten. For the first time, they experienced the delights of country living and Pam remembers petting the horses and cows in the local fields, something she was too frightened to do in later life. One night, her father Fred had a terrible time trying to get home from the Woolwich Arsenal during another air-raid. He immediately arranged for them all to move up to Shrewsbury and they lived in a house in Queen’s Street.

Pam thought she was adopted until she went to her Auntie Annie’s in Edgware and saw a photograph of Annie’s mother, Alice Mary Cook, over the sideboard – she was the spitting image of her (the relief!). Pam was the only one who took after her Dad’s side of the family for her looks. She remembered looking down at her brother, nearly six years younger than her and asking her Mum ‘how come he’s got curly hair and big blue eyes, and eyelashes that curl?’ Her Mum said ‘I don’t know Pam, I can only think he’s the scrapings off the pot!’ He was a lovely baby and his three sisters used to fight over who would take him out.

In the 1950s, Woman’s Weekly was Pam’s favourite magazine and we could never get any sense out of her until she had read it from cover to cover. Most of our jumpers came from the knitting patterns. Pam could not remember if the birthday cake (which became a family tradition) came from a recipe in a magazine or whether she had the brainwave herself. Chocolate sponge cakes were sandwiched together with melted milk chocolate and then decorated with a layer of chocolate, topped with the birthday name in Smarties. Yummy!

Pam always wanted to be a teacher, but her father couldn’t afford to send her to college to get the necessary qualifications. So Pam spent much of her working life at the General Post Office in Shrewsbury. In her position as Staff Clerk, Pam established a wide circle of friends who remember her with affection, and her life was enhanced by their friendship. Towards retirement, she was called upon to provide training for other telephonists, so her dream of teaching did come true in the end.

Pam was very fond of her grandchildren David, Peter and Rachel and she proudly showed off photos of them in her Grandma’s Boasting Book. Rachel loved staying at Grandma’s where there would always be a little present under her pillow, perhaps some sweets or “glass diamonds”. Rachel would sneak into Pam’s bedroom every morning and attempt to wake her up, saying “H’open your h’eyes, Grandma”. Pam pretended to be asleep for a while, but eventually opened one eye, causing Rachel to shriek with delight, then they would kiss and cuddle together. 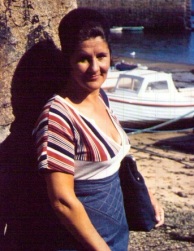 Every winter, Pam and Phil used to spend three months in the Algarve and met up with the same wonderful people each time. When Pam’s disablement became too severe, and she could no longer make the journey, Phil sent them a message:

So sorry we cannot be with you, but if one day in the future you sit on one of our favourite seats on top of the hill looking out over Albufeira Bay, a cool breeze might brush your cheek, and you will turn and find us sitting there enjoying the morning sun.

Pam had a great sense of humour, a hearty laugh and a lovely optimistic nature. On trips to the coast, she would always seek out a chink of blue amongst the blanket of grey and sing the 1938 hit Blue skies around the corner and I do like to be beside the sea-side. Everyone admired Pam for her brave spirit in enduring her last long and cruel illness. One of our friends said: “My lasting memories of Pam will be a bright vivacious lady who always looked glamorous, even on a building site”.

Pam in the snow near Rodney’s Pillar