Richard Hay married my sister Jane in 1974 and this page shows a brief history of his family.

Richard’s father was Gordon Hay. He joined the Shropshire Yeomanry at the tender age of 15. Later, following in his father’s footsteps, Gordon worked at the Shrewsbury Post Office. His death in 1982 was a shock to us all, due to malaria contracted on a trip to Malawi and misdiagnosed on his return.

Gordon’s grandfather was Harry Garnett Hay, whose experience in the 1st Dragoon Guards based in Colchester must have been good preparation for a later occupation as a mounted police officer. 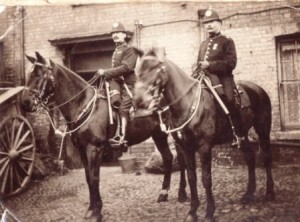 Harry Garnett Hay (on the right)

Harry Garnett Hay’s father was Edward Hay, who was a farmer, innkeeper and butler. He was the first in a long line of Hays who lived in Rochford, Worcester and they go all the way back to a Richard Hay, born in 1642 and whose father was also Richard. 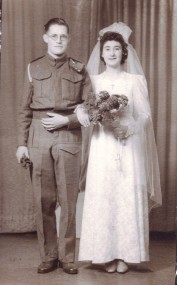 Mamie wrote some notes beside her wedding photograph which illustrate the separations endured by newly-married couples during the war:

“Had two weeks honeymoon at home in Shrewsbury. Went away back to Chester, then came back after two weeks Embarkation Leave. He went abroad for three and a half years, came back for four weeks, then went to Greece with the Army for six weeks. Then he was demobbed – Hooray!!!”

Mamie was born in 1922 to Percy Charles Ellis and Emily Glover. Percy was born in 1888 and was already working at the age of 13 as an Errand Boy Porter. Later records show that he was Church Warden for St Michael’s Church in Shrewsbury.

Percy Ellis’ father was William Ellis of the Isle of Ely in Cambridge. He married Mary Ann Eliza Bellman who was born in Hackney, London. Her father Charles Bellman, born in Torrington in Devon, was a boot maker journeyman and later a cordwainer (a worker in cordovan leather, the name deriving from Cordova, Spain).

Mamie was just three when she went to live with her Grandad William Henry Glover at Primrose Terrace off St Michael’s Street, Shrewsbury. William was a Porter at the Post Office. He married Mary Harriet Tomkiss in about 1891 and they had two other daughters besides Emily; Lizzie and Rose Glover. William came from a family of six children; his father was John Glover of Kinnerley in Shropshire.