Berkhamsted workhouse…
… was one of the most wretched hovels in the town, and sad must have been the condition of those whose misfortune had compelled them to take refuge there. It stood on land known as Salter’s Charity, in front of where the Board Schools now stand; it was a straw-thatched building, and its tumble-down condition must have awakened the sympathy of right-minded people as they gazed upon the miserable home of the aged poor. The Rev. George Nugent, a gentleman who for many years resided in the house now occupied by Mrs. Procter [Red House], had his heart moved with compassion towards these poor unfortunate creatures, and by his will bequeathed one thousand pounds for the purpose of building a house where the poor could be more comfortably cared for. This money was employed in erecting the present union-house on land also belonging to the parish, on which stood a number of dilapidated cottages known as “Ragged Row.” This building had not long been completed when the new poor law came into force, when a number of parishes were grouped together forming the union with Berkhamsted as the centre. The house that had been built for the poor of Berkhamsted alone was considered sufficient for the whole union; it was therefore purchased of the parish authorities by the Guardians of the Union, and when Berkhamsted had contributed its share, the balance of the purchase-money was invested under the direction of the Poor Law Commissioners, and the dividends arising therefrom amounting to £17 5s. 6d. yearly, are placed to the credit of the parish in aid of the poor rate. Thus, contrary to the intention of the benevolent donor, the ratepayers, and not the poor, derive the benefit from his bequest. (Nash, H., Reminiscences of Berkhamsted, 1890, pp.19-20). 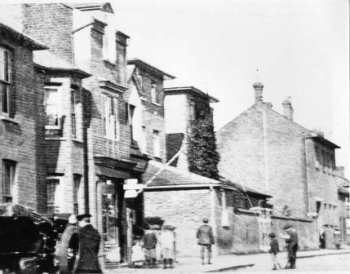 What was on the menu at Berkhamsted workhouse?
Bread (14oz) and gruel (1.5 pints) for breakfast every day except Friday when the bread allowance was only 8oz, presumably because dinner was a 14oz suet pud! On Mon, Wed and Sat, inmates could look forward to 5oz beef and 1lb of potatoes for dinner; on Tues, Thurs and Sun, 1.5 pints of soup. Supper on beef days was 1.5 pints of broth but just 2oz cheese on other days. Smaller rations were given to the aged, infirm and sick… and women: tea was made by the Matron, (one pint per woman) twice a day with bread and butter, in lieu of gruel or broth.

“In 1843 the Poor Law Commissioners complained of the practice of handing out the day’s allowance of bread in the morning, but the guardians replied that the inmates had cupboards in the day-rooms with divisions for each person’s uneaten bread.”
(Trevor May, Victorian Workhouse, 1997, p.23).

The demise of Berkhampstead workhouse…
“The workhouse had no schoolroom and in 1849, the Poor Law Board recommended that pauper children be sent to the local National School. By 1851 this had become the practice, although in 1858 the school complained about the state of children attending from the workhouse. A fever ward was erected in 1855, and a full-time nurse was engaged in 1868. The workhouse system officially came to an end in 1930, with control of workhouses passing into the control of local councils. However, the former Berkhampstead workhouse… continued in use until 1935. The building then remained empty until 1937 when the site was sold for £3,700 to make way for a shopping development.” (Peter Higginbotham, The Workhouse Encyclopedia). 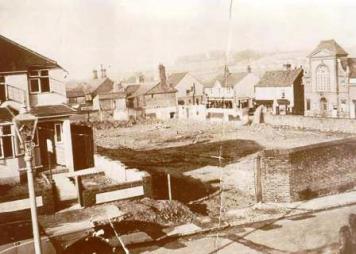 The workhouse was demolished in 1937 to make way for Kitsbury Parade; Methodist church visible across the road.