Berkhamsted Place was built by Sir Edward Carey, keeper of Queen Elizabeth I’s jewels, using faced stone and flints from the old castle which he held for the nominal rent of one red rose. From the 18th century onwards it was frequently referred to as the Castle. Although little remains of the mansion itself the area is rich in history. The Great Barn is probably older than the house.

John Rooper of Berkhampstead Castle and Bloomsbury died in 1739-40. His son Godolphin Rooper (godson of the 1st Earl of Godolphin) was born at the Castle in 1709 and in turn, his son John was born in 1744. He was High Sheriff of Hertfordshire in 1787, but he moved to Abbots Ripton where he died in 1826. 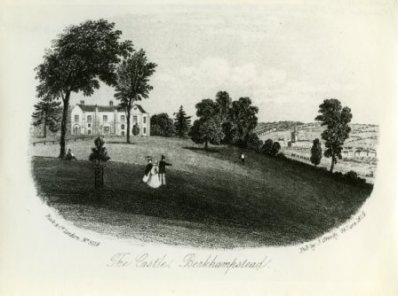 The Misses Grimstone make a regular appearance in the ‘Fashionable World’ pages of the Morning Post in the 1820s, arriving each year in Hertford-street for the London season and departing to their home at Berkhamstead Castle.

Pleasure Trip for Londoners…
Upwards of 100 poor women, connected with the mother’s meeting at St Augustine, Haggerstone, London, arrived by train. They spent a very pleasant day at Berkhampstead Castle, the residence of Lady Sarah Spencer. They had dinner and tea, fruit, &c., and as they left each visitor was presented with a small bouquet of fresh flowers.
(Northampton Mercury, Jul 1882) 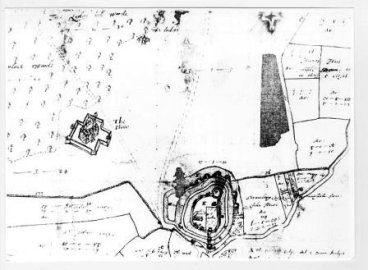 Map of Castle and Berkhamsted Place

Photograph of Berkhamsted Place, also known as the Castle, House or Manor, demolished in 1967. Photo after 1849 (when bowler hats were invented, to prevent gamekeepers from low-hanging branches while on horseback)…

Save the bees…
At Hertfordshire County Beekeepers’ Association meeting at Town Hall Berkhamsted “The Marquis of Hamilton, M.P., of Berkhampstead House, presided, and was supported on the platform by T. Curtis, Esq [of the Hall]… Mr. Frank R. Cheshire, author of ‘Practical Beekeeping.’ The noble Chairman… confessed that he had no bees of his own, which he feared was a too common case, for the art of beekeeping was not encouraged and pursued as it ought to be. Scotland and America were before this country… In Russia it was patronised by the State, and the peasants made great use of the honey, also using the wax to make candles to light the churches. It was a great pity that Berkhampstead was not a beekeeping place, for from the poorest peasant with his garden plot to their Rector they were all lovers of flowers, and therefore had facilities for beekeeping. Neither America… nor France, could produce honey so good in quality as that of Hertfordshire. (Cheers.) It was most satisfactory to see so many ladies present, and he hoped they would all patronise the Association, which had made arrangements with the grocers in the town for the sale of the honey. Mr. F. Cheshire then gave an address upon ‘The Bee, the Friend of the Cottager and the Gardener’.” (Bucks Herald, Mar 1879).