In 1819, Hassell wrote of his tour of the Grand Junction Canal: “Beyond Bourne End, we have little interesting until we reach Berkhamsted; at the entrance to this town is the elegant seat of Mr. Pechell, opposite to whose mansion is Mr. Moore’s house, pleasantly situated on the banks of the stream”. Augustus Pechell of Berkhamsted Hall was Receiver General of the Post Office and John Moore (at New Lodge) married into the Brabazon family with connections to the Earl of Meath. 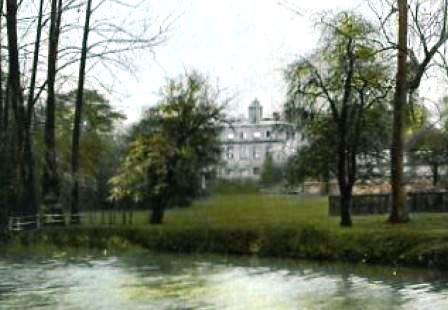 The Hall from the canal

The Hall in Berkhamsted was home to Thomas Plumer Halsey MP for Hertfordshire (1815-1854). From Frederica Halsey’s diary (wife of Thomas Halsey, M.P. at the Hall): “One night the cook ‘fell down drunk’ and was discharged. A manservant, too, ‘fell down drunk’ and ‘became quite like a madman, so violent and frightened us all to death; did not go to bed till near 2 o’clock.’ The following day he expressed great penitence and obtained Tom’s permission ‘to stay this month instead of being sent off at once.’ Then there was a Belgian cook who was discharged and ‘we had the whitewashers in to clean the kitchen, everything in a state of dirt and grease which one’s wildest imagination could hardly have conceived.’ Another disappointment was ‘the odious upper housemaid with those dreadful eyes, who let me clean windows rather than do it herself, she is to leave this day month, to my intense satisfaction as I have never liked her.’ But when another maid left, ‘I could hardly realise to myself that she was going, and when we did part we wept together.'” (Beorcham, Berkhamsted Review, Feb 1979).

Larder robbery deprives M.P. of his Christmas dinner…
“On Thursday morning, the 24th inst., at an early hour, the larder of T.P. Halsey, Esq., M.P., at the Hall, was entered, and three turkies, two brace of pheasants, and a hare taken therefrom. The thieves effected an entrance by removing the zinc, which was over the window, and perforated for the admission of air. No clue has yet been obtained of either the stolen property or the thieves. One man was taken into custody by the police, but was dismissed for the want of evidence against him.” (Bucks Herald, Jan 1847).

A Vexing Hoax reported in the Globe…
“A few days since, Berkhamstead Hall, the residence of T. P. Halsev, Esq., M.P., was visited by a number of tradesmen, who had been informed that Mr. Halsey was dissatisfied with his present tradesmen, and that he required fresh ones. It was a hoax that had been played by some practical joker.” (Hertford Mercury and Reformer, Jan 1848).

The Curtis family lived at the Hall until Constable Curtis died in 1909. The house and grounds were extensive and required the services of several local residents.

Fur, lace and ostrich feathers for a winter wedding…
“A large congregation attended the Parish Church… to witness the marriage of Capt. Kennedy, late Adjutant of the 2nd Herts Volunteers, and Miss Sophia Constable Curtis, third daughter of Capt. Constable Curtis, of The Hall, Berkhampstead. An awning had been erected from the west entrance, and the path laid with scarlet cloth. The Church was decorated with choice flowers from the Hall, Haresfoot, Ashlyns, and Pendley conservatories. The bride, who was given away by her father, wore a dress of poult de soie, trimmed with beaver fur and Honiton lace, and a large white felt hat with cream silk crown trimmed with beaver and ostrich feathers. The two child bridesmaids were the Misses Molly and Dorothy Curtis, nieces of the bride, who were dressed in white silk smocks, with hats and muffs to match, and brown shoes and stockings. They wore jewelled safety pin brooches, the gift of the bridegroom. The best man was Capt. H. C. Howard, 60th Rifles. The ceremony was performed by the Rev. H. Constable Curtis, brother of the bride, assisted by the Rev. A. Johnson, rector. A large company met afterwards for luncheon, and Capt. and Mrs. Kennedy left for London soon after amid a merry ringing of bells. Upwards of 140 wedding presents from friends, tradesmen of Berkhampstead, servants at the Hall, Ashlyns, mothers’ meeting at Whelpley Hill, and others, were on view on the previous day.” (Bucks Herald, Dec 1895). 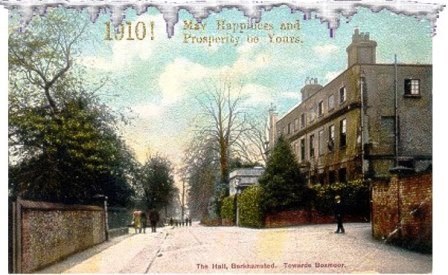 The Hall, viewed from the canal, was “purchased by Berkhamsted School in May 1928 and used as a preparatory school until 1937, when it was demolished.” (Berkhamsted Through Time). Hall Park Estate was developed on this site.